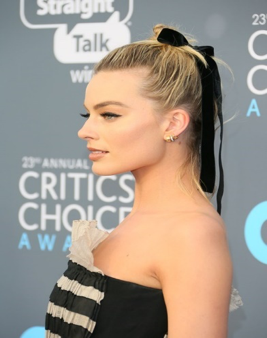 We’re all aware that Valentine’s Day is right around the corner. If you’ve watched TV at all over the past month, you also know that it’s awards season. Every year, Hollywood’s finest emerge to showcase not only support for each other’s impressive works, but new, red carpet-ready trends and styles.

•     Want to learn how to do Hollywood-worthy hair and makeup? Start at Pivot Point Academy today!     •

As Valentine’s Day and awards season harmoniously overlap, we can’t help but find inspiration from celebrity looks and incorporate them into our own wardrobe and makeup routines. Valentine’s Day can be so much more than a red lip. It’s the perfect occasion to mix it up and try something new.

We’ve reviewed all the looks from both the Critics Choice and SAG (Screen Actors Guild) Awards and have casted our votes. Here’s our comprehensive list of favorite hair and makeup combinations we believe you’ll love for Valentine’s Day.

Glam + ballerina = glamberina. Sleek buns are gracing the red carpet for timeless, romantic elegance that can be dressed up or down.

When in doubt, wrap it in a velvet bow and call it a day. This fashionable topknot is a far cry from Robbie’s 90’s hairstyles in her I, Tonya lead role as controversial Olympic ice skater Tonya Harding, which won her the Critics’ Choice Award for Best Actress in a Comedy. The messy bun and refined makeup shows Margot Robbie’s softer side, an arguable juxtaposition from the character she plays.

Strangest thing: when we were 13, we were mastering the crimper and dabbing on edible lip gloss. Meanwhile, Millie Bobby Brown served us an alternative take on the classic ballerina bun and minimal makeup at this years’ SAG awards. Her sleek dual-bun shows off her evolving, yet youthful fashion sense. After all, she’s still just 13.

Loose updos are timeless, flattering, and versatile. If you’re pressed for time before your big date and stumped as to what to do, consider putting your hair in an easy updo for a low-maintenance, but high-impact look.

We’re not [Big Little] lying: Nicole Kidman’s low, side-swept bun deserves an encore. It’s classy, sassy, and softens her face in contrast to her red lip and piercing blue eyes. She also took home a most coveted accessory: the statue for Outstanding Performance by a Female Actor in a Miniseries or Television Movie.

It’s not just us thinking pink. The Lady Bird actress and Outstanding Performance by a Female Actor in a Leading Role nominee stunned in a sophisticated, yet delicate updo and makeup at the SAG Awards. The updo was actually a low ponytail with a silver thread running throughout, adding to her ensemble’s whimsical nature.

Lupita Nyong’o is well-known for making bold red carpet statements. But, one thing that hasn’t changed is her devotion to her signature, short hairstyle. And with near-perfect bone structure like that, why wouldn’t you show it off?! Lupita’s simplistic yet glowing makeup is the finishing touch to complementing her (not pictured) dramatic, glittery dress.

Okay, we won’t lie: we don’t ‘heart’ Kate Hudson’s SAG Awards dress choice as much as we’d hoped. The patterned dress sparked a lot of internet commotion and confusion among the masses. But, what we for sure love is from the neck up: her short pixie cut! Hudson initially chopped her hair for her role in Sia’s film Sister, for which a buzzcut was required. Since then, it’s grown into a sophisticated ‘do that adds edge to any outfit – just maybe not this particular one.

Curls just wanna have fun. We’re all for stars playing up their natural curls to add a fun, carefree vibe to formalwear. So, when we saw these beauties doing just that, we couldn’t help but fall in love with the style for a fun-loving Valentine’s Day date!

This Is Us, staring at the sheer perfection that is Mandy Moore – or, as the world now knows her, Rebecca Pearson – at the SAG Awards. The star, along with castmates Chrissy Metz and Susan Kelechi Watson, wore cobalt blue, but was anything but from taking home a win for Outstanding Performance By An Ensemble in a Drama Series. With a teal-infused smokey eye topping off her bouncy curls, this is a look to remember.

The Black-ish and Grown-ish actress was all kinds of styl-ish at this year’s SAG Awards. The teen’s Diana Ross-esque locks were the talk of the town, showcasing her fun personality and authentic beauty. Other than a glossy red lip, Yara kept the rest of her makeup subtle, proving that more often than not, less is more.

We use cookies on our website to give you the most relevant experience by remembering your preferences and repeat visits. By clicking “Accept All”, you consent to the use of ALL the cookies. However, you may visit "Cookie Settings" to provide a controlled consent.

This website uses cookies to improve your experience while you navigate through the website. Out of these, the cookies that are categorized as necessary are stored on your browser as they are essential for the working of basic functionalities of the website. We also use third-party cookies that help us analyze and understand how you use this website. These cookies will be stored in your browser only with your consent. You also have the option to opt-out of these cookies. But opting out of some of these cookies may affect your browsing experience.
Necessary Always Enabled
Necessary cookies are absolutely essential for the website to function properly. These cookies ensure basic functionalities and security features of the website, anonymously.
Functional
Functional cookies help to perform certain functionalities like sharing the content of the website on social media platforms, collect feedbacks, and other third-party features.
Performance
Performance cookies are used to understand and analyze the key performance indexes of the website which helps in delivering a better user experience for the visitors.
Analytics
Analytical cookies are used to understand how visitors interact with the website. These cookies help provide information on metrics the number of visitors, bounce rate, traffic source, etc.
Advertisement
Advertisement cookies are used to provide visitors with relevant ads and marketing campaigns. These cookies track visitors across websites and collect information to provide customized ads.
Others
Other uncategorized cookies are those that are being analyzed and have not been classified into a category as yet.
SAVE & ACCEPT